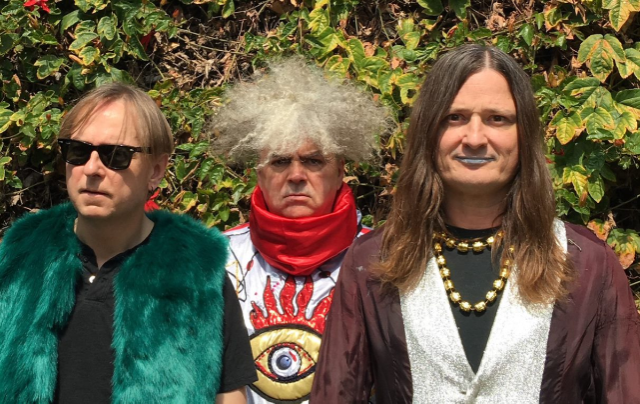 The Melvins formed in Montesano, WA in 1983 the founding members were Buzz, Mike Dillard (drums), and ex-Mudhoney bassist Matt Lukin. Buzz, Mike, and Matt all went to high school in Montesano. The name Melvins came from a Manager of the Thriftway grocery store in Montesano where Buzz served as clerk.

Mike Dillard left the band in 1984, Dale Crover shortly thereafter recruited out of the Iron Maiden cover band he played in and has been a member ever since. Matt was replaced by Lori Black (Lorax) (Shirley Temple's daughter) in 1988 when they left Washington for San Francisco, CA.

The Melvins have had quite a few bass player changes during their tenure. Check out the Melvins Bassist Morgue to learn more. The Melvins are currently based out of Los Angeles, CA.

The Melvins Discography is an exhaustive resource of their many releases. They were on a major label Atlantic Records for three albums, although most would agree they're not the type of band that would appeal to a major label. They are often quoted as knowing this while they were on the label and just took advantage of the drunken blitz the record companies were on in signing any band connected to a supposed Seattle "grunge" sound. Melvins have also released music on Ipecac Recordings, Boner Records, Alchemy Records, Amphetamine Reptile Records, Alternative Tentacles Records, and numerous other independent record labels over the years.

Buzz has a side project called Fantômas with Mike Patton (Faith No More/Mr. Bungle) who is also owner of Ipecac Recordings the label the melvins are currently releasing material through. He also played guitar in the hardcore/grind "supergroup" Venomous Concept, featuring members/former members of Napalm Death and Brutal Truth (also released through Ipecac).

Melvins have toured with KISS, White Zombie, Nine Inch Nails, L7, Primus, Tool, and Rush, among others and were also on the Ozzfest tour in 1998. They toured with a second guitarist David Scott Stone from 2000-2003. Former bassist Kevin Rutmanis (1998 - early 2005) used to be in the band Cows, he was also in another Mike Patton project along with Duane Denison of the Jesus Lizard called Tomahawk. If you ever get the chance to see them live be sure to give them gifts, they prefer Cracker Barrel gift certificates. 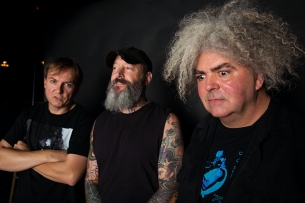 The Melvins were formed in Montessano, Washington in 1983 by Buzz Osborne, Matt Lukin and Mike Dillard.  Lukin and Dillard left the band and drummer Dale Crover stepped in shortly thereafter.  Osborne and Crover have been the Melvins' mainstays throughout their 29 year metamorphosis.

To date the band has released 27 original albums, numerous live full-lengths and far too many to count singles and rarities.  They've partnered with Jello Biafra, Lustmord and Fantomas for individual releases and toured the world many times over (side note: the band was in both Christchurch and Tokyo for their 2011 earthquakes).

With the release of (A) Senile Animal in 2006, the Melvins became a four-piece, essentially annexing Jared Warren and Coady Willis of Big Business.  The Melvins, already known for their shattering mix of punk-meets-metal (and often referred to by an assortment of tags including sludge and grunge), were now louder and more bombastic than ever leading to a resurgence in the band's popularity and a run of three original full-lengths.  Never ones for complacency, Buzz and Dale have since created Melvins Lite, a line-up partnering the pair with Mr. Bungle’s Trevor Dunn and most recently teamed with Butthole Surfers’ JD Pinkus and Paul Leary for the 2014 release, Hold It In.

We Are The Asteroid